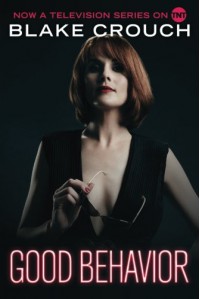 Good Behavior is a collection of the three short stories about Letty Dobesh, written by Blake Crouch. Crouch is a best selling novelist and screen writer. His Wayward Pines trilogy has been adapted into a series on FOX, and Good Behavior is currently airing on TNT.

Good Behavior introduces us to Letty Dobesh, fresh out of prison and trying to make a new start. But as her boss reminds her, once a junkie whore, always a junkie whore. Letty tries to make a break from her past, but making it in the straight world is harder than it seems. And a good grift makes it easier to coast by for a few months.

"The Pain of Others" finds Letty a party to an unusual situation. Interrupted in the middle of a heist, she overhears a murder being planned. "Sunset Key" sends Letty to the Florida Keys, to the side of a man spending the end of his free life on his private island. And of course there's a heist involved. "Grab" finds Letty in Las Vegas, going along on the steal of a lifetime.

At the end of each novella, Crouch tells us of his experiences turning Letty from a character on a page into the star of a TV series. These bits are not short, but they give some great insight into the creation process of a new TV series. And as Crouch is both the writer and a producer on the Good Behavior series, the continuing development of Letty should be seamless.

I enjoyed the novellas, there were a few twists in each one, but while I think the best twists were in "Sunset Keys", many feel that is the weakest story in the book. I'm not certain I agree with that, but Letty in that story is much different from her in the others. She and Javier are the recurring characters in both the novellas and in the show, and their relationship is an interesting one, filled with admiration, dislike, and some serious flames. I'm hoping that Crouch will continue to both write new Letty novellas as well as episodes for the series, but we'll see how that is able to unfold.

In the interest of disclosure, the publisher, Thomas & Mercer provided me with an advance copy of Good Behavior.