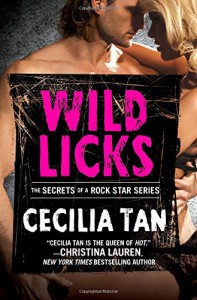 Wild Licks, the second book in Cecilia Tan's Secrets of a Rock Star series, is a wild, sexy spin into the "unconventional" lives of Mal & Gwen.

We met Mal and Gwen in the first book, Taking the Lead, but we get to know them in this one. Mal is the broody bad boy of The Rough, a "one and done" guy. Until he meets Excrucia that is. A masochistic bottom, who loves what Mal dishes out. Gwen is a proper lady, an aspiring actress, and way out of Mal's normal tastes. They keep getting put together for publicity outings, and begin to be interested in one another.

Mal and Excrucia continue their lovely kinkfest, until the accident happens. Excrucia is revealed to be Gwen, and Mal bolts. He's afraid of damaging another person, afraid of his "unnatural urges", and afraid of the growing feeling he has for Gwen. Leaving the country to record a new album seems to be the best idea he's heard in a while, so Mal jumps on the chance.

There's some drama that then unfolds, mostly revolving around Mal and his stubbornness. His inability to trust himself was severely broken, and needs to be rebuilt before he can move on into the relationship he wants with Gwen.

I did receive a copy of Wild Licks from the publisher in exchange for a fair review.