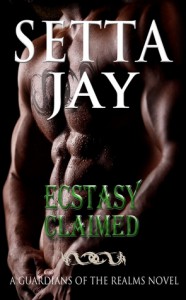 The 2nd book in Setta Jay's Ecstasy series, which is actually called The Guardians of the Realm series, has all the high points of the first book, but not the rape low points. Sooo much better. There's still the tension, because Cyril, the nasty icky, kidnaps even more Mageia to work on his serum, but it's at an entirely different level.

Ecstasy Claimed is the story of Gregoire and Alyssa. They're both Hippaeus, which is a half war-horse Immortal breed. Alyssa spends her entire life convinced that she'll never be mated, she's met the Immortal men in Tetartos, and none of them have been the right one. Then she finds out that she's actually had a mate the entire time, he just didn't bother to come claim her in the five years since she turned twenty, when she came of age. Which Immortal is he, and is he just a jerk, or is he ashamed of her because she's the smallest Hippaeus?

Alyssa decides not to dwell on that topic too long, taking herself and her best friend to a pleasure island, where Gregoire tracks her down, and takes her back to the Guardian compound. Typical Guardian behavior, they're super Alpha Male, and when they start to bond with their mate, nothing will keep them apart. On the pleasure island, there's a rather hot MFFM scene, one that Gregoire gets furious about, knowing that someone other than himself has touched his precious mate.

In the meantime, female Mageia are being kidnapped from around the realm of Tetartos, and being taken to Cyril's lair to be experimented on. He's trying to find a serum to break the mating spell, so that he can mate with any female and take on her powers. Yeah, not a good thing at all.

The Guardians rescue the Mageia, fortunately only losing one. But her loss hits too close to home for Alyssa, as she was friends with her. But she was able to kill Cyril before he could keep working on his nefarious plan.

I liked this book much better than the first one. There wasn't the ugly rape scene, and there weren't all the flashbacks. There were still a couple flashbacks, but they were few & far between. The sex wasn't quite as hot either, but there was more of a love story between Gregoire and Alyssa, which was nice. Gregoire is still a total Alpha Male, but he's not quite as much of a raging asshat as some of the others. Not saying a whole lot, but he's a little better. Like I said, there isn't quite as much ragingly hot sex. There are a couple scenes that are steaming, which are incredibly enjoyable, but fewer than the first. So if you're not quite as hot for the smut, you may like this one better.