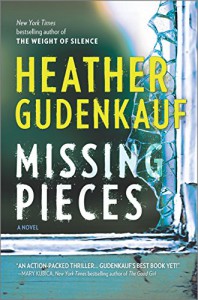 Missing Pieces starts of with some unanswered questions, and just piles more and more of them on.

Sarah Quinlan's husband Jack has been called back to his hometown, Penny Gate, Iowa. His aunt has had a horrific accident, and is in a coma. When Aunt Julia suddenly dies, Jack's family, most notably his sister Amy, are the first person the sheriff suspects of her murder.

As Sarah starts to look into Julia's murder, she discovers that Jack and Amy's mother was brutally murdered in their childhood home. Not killed in a car accident as Jack has maintained for twenty years. Sarah finds a way to get a hold of the case files in Jack's mother's murder, and finds that Jack was not only a suspect, but he was acquitted in the murder. And with Amy jailed for suspicion of Julia's murder, Sarah has to find the murderer before it's too late.

I'll admit, this wasn't my favourite murder mystery. Jack came across as a selfish jerk who puts his comfort ahead of telling his wife the truth. Jack's cousin Dean and his wife Celia had awkward roles, mostly revolving around Celia and Jack being deeply involved with each other before Jack's mother's murder. That's yet another thing that Jack lies to Sarah about. Everything about his past Sarah has to drag out of the past and throw it into Jack's face, where he continues to deny it until enough proof is given that he finally has to grudgingly admit that he's lying yet again.

The twist at the end, where they murderer is revealed did surprise me. It shouldn't have, in retrospect, but I was surprised. All in all, it wasn't a *bad* book, just not on the list of books I'll read again. The first 3/5's had a plodding pace, just rehashing things over and over again. Then the pace began to pick up, but it really didn't redeem the beginning. I picked up and put down this book at least half a dozen times, even reading another book in the middle of it.

I was provided an ARC of this book by the publisher in exchange for an unbiased review.